You produce and consume Maleic Anhydride and 1,4-Butanediol & Derivatives. We provide the data and insight you need to do so effectively and profitably.

How clients benefit from our Maleic Anhydride •
1,4-Butanediol data services

The data, analytics and insights we provide

A chemical intermediate, maleic anhydride can be produced from three feedstocks – benzene, butane and phthalic anhydride waste. Maleic anhydride markets are very regionalized, although there is some inter-regional trade. More than 50% of maleic anhydride is used to produce unsaturated polyester resins (UPR). Applications for UPR include boat hulls, car parts, furniture and pipes. Maleic anhydride is also used in the production of plasticisers and dibasic acids such as fumaric acid, maleic acid and succinic acid.

Benzene is consumed primarily in the production of ethylbenzene and styrene monomer, cumene and phenol, cyclohexane, chlorobenzene, nitrobenzene, alkylbenzene and maleic anhydride as well as a chemical intermediate. Benzene can be sourced from reformate, pyrolisis gasoline, toluene disproportionation and the hydrodealkalation of toluene.

PBT (polybutylene terephthalate) is an engineering thermoplastic used in applications including automotive, electrical and electronic components, appliances and household items such as toothbrush fibres. It is a polyester and is made by the reaction of 1,4-butanediol with either PTA (purified terephthalic acid) or DMT (dimethyl terephthalate). It has good electrical properties and is heat resistant up to 150oC, or 200oC when reinforced with glass fibre. It offers lower water absorption than polyamide and better chemical and environmental stress crack resistance than polycarbonate.

Succinic acid is a dicarboxylic acid currently produced either from conversion of petroleum-derived maleic anhydride or from bacterial fermentation of carbohydrates. Historically, the high cost of producing succinic acid from petroleum feedstock limited its use to a narrow range of applications such as pharmaceuticals and food ingredients. The growing availability of biobased succinic acid is opening applications such as plasticizers, polyurethanes, personal care products, deicing solutions, resins and coatings, lubricants, and as a building block for a number of chemical intermediates. Succinic acid can be used to produce 1,4 butanediol (BDO), tetrahydrofuran (THF) and polybutylene succinate (PBS) biodegradable resins.

Polytetramethylene ether glycol (PTMEG) is used primarily for elastomer production, with spandex fibres being the key end use. Other end uses include polyurethane resins used in the production of synthetic leather, flexible adhesives and coatings and solid elastomers. PTMEG is commonly produced through acid catalyzed polymerization of THF which is derived from 1,4 butanediol. It is available in various molecular weights and offers hydrolytic stability and a high degree of flexibility.

Spandex, also known as elastane, is a segmented polyurethane. The major raw materials used in the manufacturing process are PTMEG and pure MDI. Spandex can be produced through dry, wet or melt spinning, with dry spinning being the most common method. Due to it exceptional elasticity, spandex can be stretched significantly without breaking and still retains its original shape. Its major applications are in clothing, underwear and sportswear where comfort and elasticity are paramount. When used for clothing spandex fibres are often mixed with cotton, polyester etc with the amount of spandex determining the elasticity.

Natural gas is a hydrocarbon gas consisting mainly of methane produced from decomposing vegetation and animal matter. Natural gas is a non-renewable, fossil fuel used for heating, cooking and electricity. It is also used as a fuel and as a chemical feedstock.

Butadiene is the third of the major olefins, after ethylene and propylene. It is extracted from C4 streams, mainly from steam crackers but also from refinery cat crackers. It has been called ‘the co-product of a co- product’ but is really an important chemical in its own right. Its major outlets include production of the engineering plastic ABS (acrylonitrile-butadiene-styrene) and the synthetic rubber SBR (styrene-butadiene rubber), a major constituent of vehicle tyres. The volumes of butadiene produced are largely influenced by the operating rates of ethylene crackers and the feedstock used.

Maleic anhydride is a chemical intermediate used in the manufacture of composite materials and other resins for use in automobile production and in pipes, marine and construction. Maleic anhydride and derivatives are also used in food additives and as an additive in lubricants and for oil drilling and paper sizing. Unsaturated polyester resin (UP resin) is the main application, representing about 63% of the use of maleic anhydride globally. Other applications include acidulants, such as malic and fumaric acid and BDO and derivatives, including polybutylene terephthalate, a strong and versatile engineering thermoplastic. 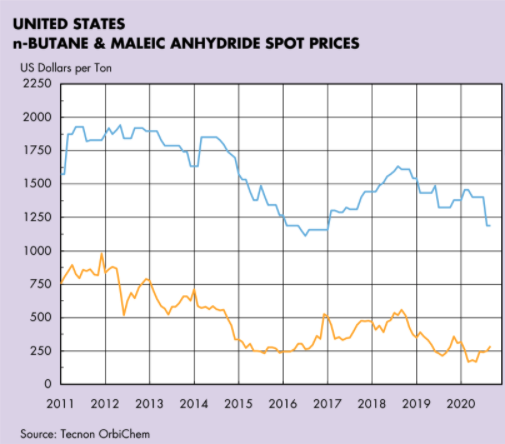