You produce and consume engineering thermoplastics; we provide the business intelligence you need to do so effectively and profitably.

How clients benefit from our Engineering Thermoplastics data services

The data, analytics and insight we provide

Polyamide (Nylon) resins include a range of polymerisation polymers, PA6, PA11, and PA12, as well as several condensation polymers, such as PA66, PA6/10, and PA4/6. PA6 is a polymer of caprolactam. PA66 is produced by condensation polymerisation of adipic acid and HMDA. Together they account for a large majority of the engineering resin volume produced globally. PA6 is easier to injection mould, cast, or film, while PA66 has superior temperature performance and tensile strength in automotive applications and is usually more expensive.

Polycarbonate resins are made from phosgene and bisphenol A (BPA) though a newer, greener process now employs dimethyl carbonate and BPA. The principal use is in the electronics sector for components and housings where its good electrical insulation, heat resistance and flame retardant properties are at a premium. Other uses include extruded sheets in construction, glazing in the automotive sector and medical use. Optical media applications such as CDs, DVDs and Blu-ray discs has declined. Polycarbonate resin production is predominantly in Asia where most volume applications are located.

Polyacetal, or POM (polyoxymethylene), is an engineering thermoplastic known for its toughness and rigidity, as well as resistance to fatigue, creep and abrasion. Products manufactured from polyacetal are used primarily in automobiles, household appliances, and electronic and electical goods. Polyacetal is a derivative of formaldehyde, via paraformaldehyde; formaldehyde is the largest volume derivative of methanol.

PBT (polybutylene terephthalate) is an engineering thermoplastic used in applications including automotive, electrical and electronic components, appliances and household items such as toothbrush fibres. It is a polyester and is made by the reaction of 1,4-butanediol with either PTA (purified terephthalic acid) or DMT (dimethyl terephthalate). It has good electrical properties and is heat resistant up to 150oC, or 200oC when reinforced with glass fibre. It offers lower water absorption than polyamide and better chemical and environmental stress crack resistance than polycarbonate.

ABS is a copolymer of acrylonitrile, butadiene and styrene. It is generally considered to be an engineering plastic. Applications include automotive, electrical and electronics, and domestic appliances, where this polymer has a number of unique properties, though it faces competition from other engineering thermoplastics

Styrene Acrylonitrile (SAN) is a copolymer of styrene and acrylonitrile. It offers high heat and chemical resistance. It has a wide range of applications in electrical/electronic parts, automotive parts, office consumables.

Acrylonitrile is produced from the ammoxidation of propylene. Its main use is in acrylic fibre, ABS (acrylonitrile-butadiene-styrene) and SAN (styrene-acrylonitrile) resins, adiponitrile and acrylamide.

Adipic acid is a chemical intermediate used in the production of nylon 66 resin and nylon 66 fibre or in polyol and polyurethane production. By far the largest demand is in nylon 66 production for both fibre and resin, whilst the remainder is consumed in non-nylon applications including polyurethanes. It is produced by oxidising cyclohexane to cyclohexanol and cyclohexanone, generally with a catalyst, and then the products are reacted with nitric acid to form adipic acid.

Butadiene is the third of the major olefins, after ethylene and propylene. It is extracted from C4 streams, mainly from steam crackers but also from refinery cat crackers. It has been called ‘the co-product of a co- product’ but is really an important chemical in its own right. Its major outlets include production of the engineering plastic ABS (acrylonitrile-butadiene-styrene) and the synthetic rubber SBR (styrene-butadiene rubber), a major constituent of vehicle tyres. The volumes of butadiene produced are largely influenced by the operating rates of ethylene crackers and the feedstock used.

Caprolactam is the chemical intermediate used in the production of polyamide 6 fibres and resins. Conventional technology for caprolactam production is based on the key intermediate cyclohexanone, which is usually produced by the oxidation of cyclohexane, but it can also be made from phenol or toluene. Cyclohexanone is then reacted with hydroxylamine sulphate to produce cyclohexanone oxime and this is followed by a Beckmann rearrangement using oleum to yield caprolactam. Polyamide 6 is used in engineering resins and nylon fibres.

Dimethyl terephthalate is a white solid, derived from terephthalic acid (TPA) and methanol. Paraxylene is the main feedstock. DMT is mainly used as an intermediate in the production of polyester, but this use is not growing as most new polyester production is based on purified terephthalic acid feedstock, rather than DMT. There is some growth in the consumption of DMT as a feedstock for the production of cyclohexane dimethanol (CHDM), a comonomer in polyester films and resins. The main areas of DMT consumption are in polyester films and specialty fibres.

Methanol is one of the world’s major commodity chemicals and a feedstock for chemicals used in many common consumer products. Methanol is made from natural gas and production sites are predominantly located where there are large quantities of cheap gas – often in remote areas and/or associated with oil production. It is easy to transport and is moved around the world in large volumes. Its major derivatives are formaldehyde, acetic acid, MTBE, methyl methacrylate and a variety of chemical intermediates. It also has a whole host of minor uses, including solvents, which are sometimes region-or even country-specific.

One of the building blocks of the petrochemical industry and one of the most important monomers in its class, styrene is made up of two other basic building blocks, benzene and ethylene via ethyl benzene. Plastics are the main use for styrene. Plastics include polystyrene – representing over 50% of demand - unsaturated polyester resins, ABS, SAN, and SBR. Derivatives are found everywhere from food-grade film to toys, construction pipes, foams, boats, latex paints, tyres, luggage and furniture.

Engineering Thermoplastics is a broad term used to describe a group of functional polymers with varying properties including hardness, impact strength, rigidity and resistance to water, chemicals, or UV, among many others. Engineering Thermoplastics are produced using several different manufacturing processes with polycondensation polymerisation, the most commonly used method. These materials can be processed using blow moulding, injection moulding, extrusion or thermoforming equipment, and are used in a variety of industrial applications ranging from simple gears to highly specialised aerospace components. Engineering Thermoplastics have gained wide acceptance in the automobile industry as substitutes for other materials such as metal or glass, for example — as well as for power train and engine parts which require light weight and durability, and where resistance to heat, wear and abrasion are critical. Engineering Thermoplastics can be sold as virgin or compounded resins, which include fillers such as glass fibres or light stabilisers, and in blends or alloys.

Many Engineering Thermoplastics materials are produced and traded globally on a large scale including polyamide 6 and 66 resin, polycarbonate, polyacetal, polybutylene terephthalate, and ABS. 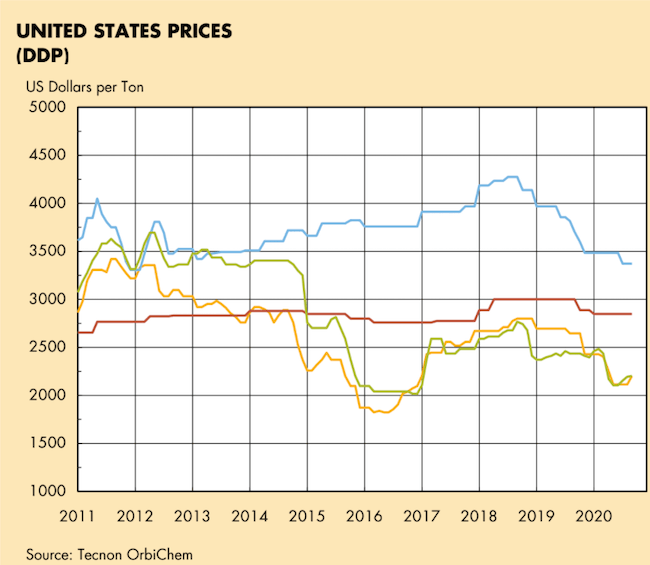